A young woman smiles quirkily at the audience. She’s sitting next to a spiked wood board. She holds a brush in her right hand, slides it through her hair, still smiling. With her left hand she picks up white fibres from the floor. She mounts the fibres onto the board and starts brushing them over the spikes. A hard monotonous sound fills the room.

‘I make mistakes’ is a live performance by Claire Stragier connecting the processing of textiles, movement, sound and language with each other.

It started out with a few questions: How can I manipulate wool with my body and as little objects as possible? Is it possible to make a sound composition during this process? Do we need language as a decoder or does it confuse things even more? What is my role as an artist/performer in all of this? The way I stand there, on stage, tells a lot about me.

The processing of wool, or any textile fibre, has become a complex, hidden, industrial process. Through a historical and anthropological analysis one learns that its origins are very simple: one person manipulating a raw material with the help of a few wooden sticks. It takes time and skilled hands. Repetitive actions make up the process, from washing the dirty wool to felting and weaving.

The repetition demands a curious mental journey of the performer: it seems like forever when you’re too conscious in the beginning, the trance you encounter after a while feels like bliss, until you’re so caught up in the trance that you don’t know what you’re doing anymore. This is where the mistake can happen and where the skilled performer distinguishes itself from the apprentice.

In ‘I Make Mistakes’ sound is used to transfer this particular state of repetition to the audience. Contact microphones amplify certain actions, the brushing described earlier for instance. A drum kit is used as an instrument to maintain the rhythm of the action, like rowers in ancient boats were accompanied by a drumbeat. The loom becomes an unexpected musical instrument. The performer recites code systems, ‘A-B’, ‘0-1’…

The scenography comes across as the set-up of a one-woman-band where the singer is playing the drums, the guitar and the keys. Instead of singing she’s walking on a tarpaulin roll filled with wool, making a carpet. She’s playing, looses herself in the play. She goes for the grand finale but will she get there? Wasn’t the playing itself the point all along?

‘I Make Mistakes’ was developed during a summer residency in Netwerk, Centre for Contemporary Art in Aalst, Belgium. Claire Stragier started investigating the processing of wool in collaborative performances with Annelien Vermeir under the moniker Sheepnoise (2011-2013). More information about Sheepnoise 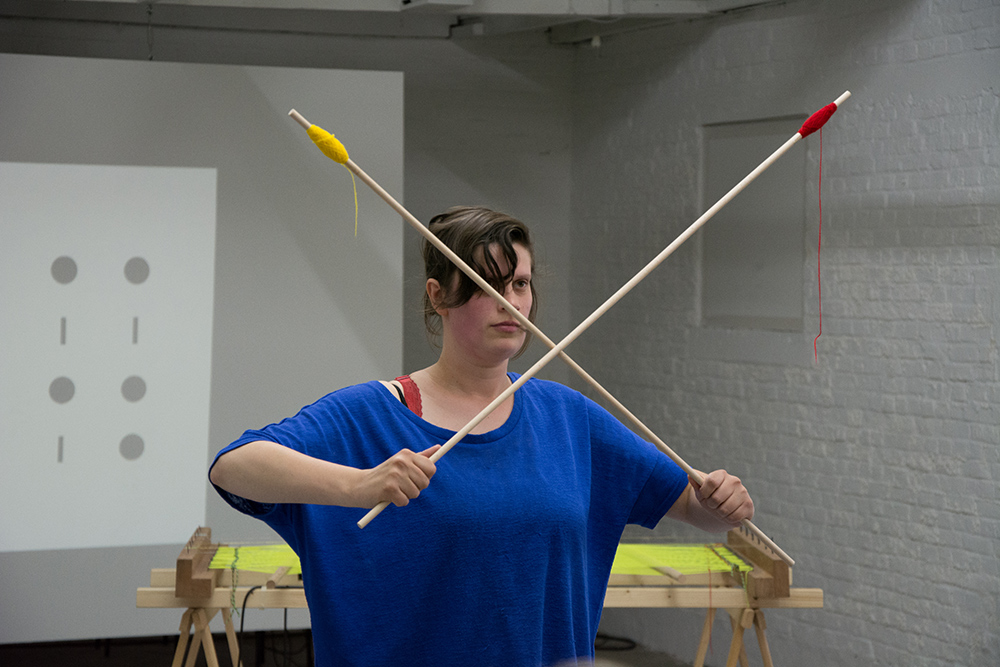